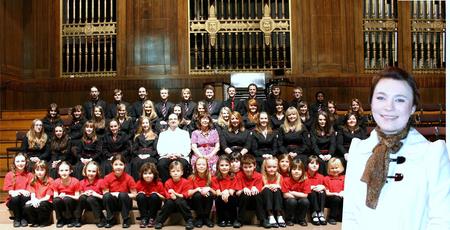 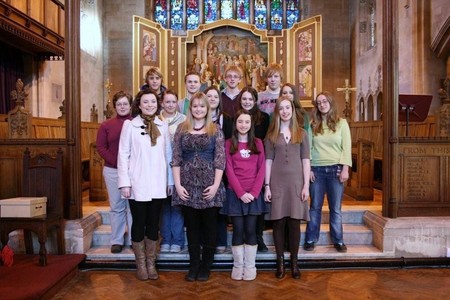 Natalya with some of the senior members of Ariosa Singers

We congratulate Natalya on winning the GOLD MEDAL at the Guildhall School of Music and Drama, 2011 and the Kathleen Ferrier Award 2012.

Natalya studied with Penny Ryan and achieved her ATCL diploma before moving to the GSMD for her music degree.

She studied at the Guildhall School of Music and Drama under the guidance of John Llewelyn Evans. Natalya’s grandfather, originally from the Ukraine, settled in Wales during the Second World War. Natalya was born in Morriston, South Wales where she regularly appears as a guest soloist for Male voice choirs including the Morriston Orpheus, Pontarddulais and the Dunvant male voice. In 2006 she was a prizewinner in the Young Kathleen Ferrier Bursary award.

Her work in Wales includes performances in the Brangwyn Hall as guest soloist for the Morriston Orpheus Choir and at the Millennium stadium she regularly sings the anthem for Wales’ European football fixtures.

Operatic engagements have included Anne Truelove The Rake’s Progress at the Millennium Centre, Cardiff for WNYO. Her performance was described as ‘A performance of remarkable maturity’ and ‘utterly sympathetic’ by Glyn Purseglove.

Awards include first prize at the London Welsh ‘young singer of the year’ and more recently, first prize in the 2008 Welsh Singers Competition.

In 2009 she sang La Rondine with British Youth Opera, Rachmaninov Songs at the Barbican and Messiah in Fishguard. Natalya represented Wales in the BBC Cardiff Singer of the World competition in the summer of 2009.

Natalya is supported by the Joyce Newton Bequest, the Dorothy Willner and Harry Rolfe Scholarships and the City of London Corporation.

Natalya accepted a place with Houston Opera, USA in September 2012.

Recently she has sung with Garsington Opera in Tchaikovsky's Eugene Onegin and received 5 star reviews. In the summer of 2016 she sings with Holland Park Opera, London.