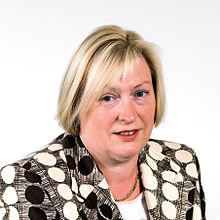 Edwina Hart was for many years  the Welsh  Assembly member for Gower and was born and raised in Gowerton where she still lives with her daughter, father and husband. She attended Gowerton Girls Grammar School where she enjoyed English and Music and was a member of the National Youth Orchestra of Wales.

She worked in banking where she became active in the trade union movement and was elected as the first female president of banking union BIFU (now part of Amicus).

As well as her extensive work in the trade union movement for which she received an MBE for trade union services in 1998 she also served as a member of the Broadcasting Council for Wales and the Wales Millennium Centre.

She was elected to the first Assembly in 1999 and became the Assembly's first Finance Secretary. In 2000 this was changed to include responsibility for local government and she became Minister for Finance and Local Government. After the 2003 Assembly election she took on the newly created Social Justice portfolio and became the Assembly's first Social Justice and Regeneration Minister.

After being elected to serve a third four year term in 2007 she became the Minister for Health and Social Services. In 2011 she became Business Minister in the new cabinet. She retired from the Welsh Assembly in 2014

Her main interest is politics, especially equal opportunities and economic development. She is proud to of her trade union past and is a member of both Unite and Community. On a rare break from work Edwina likes to enjoy the beautiful countryside her constituency has to offer with her dog and indulge her other passions, music and literature.